Contact us with any questions you might have regarding Cell MD, Stem Cell Therapy, and/or booking your first procedure. We look forward to hearing from you and helping you discover the future of regenerative medicine! 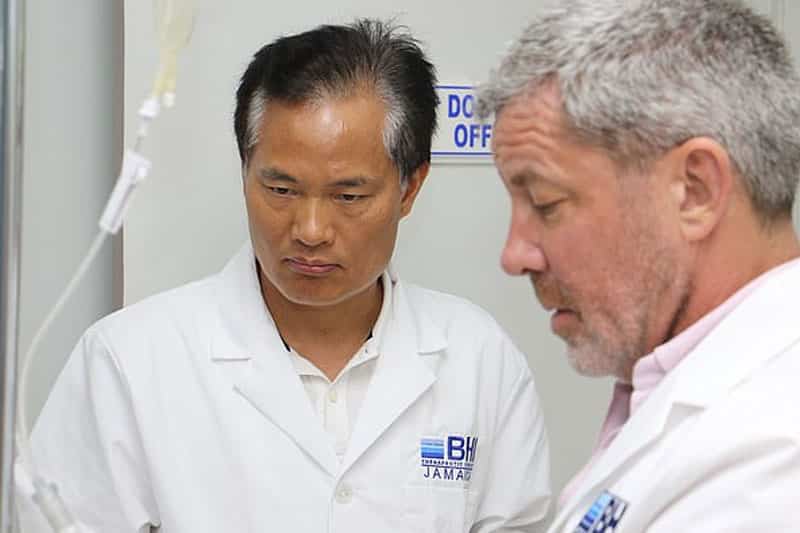 The following article “Chinese Doctor Claims He Made a Breakthrough in Coronavirus Pandemic with Stem Cell Injections Having 100% Success Rate After Treating Nine Mostly Elderly Patients” was written by Ryan Parry West and published by The Daily Mail. It was published on March 18th, 2020 and has been edited for distribution on Stem Cells LA‘s blog.

A Chinese doctor who runs a lab in Wuhan claims he could save thousands of lives. This comes after he made a breakthrough in the treatment of the deadly pathogen. Dr. Dongcheng Wu, a stem cell therapy expert, said he has successfully treated nine patients hospitalized with COVID-19.

The mostly elderly patients had developed serious breathing issues. Additionally, they showed signs of overwhelming inflammation in their lungs. Alongside conventional treatment, Dr. Wu infused Human Umbilical Cord Mesenchymal Stem Cells (UC-MSCs) directly into all nine patients’ veins. He claimed they all made a complete recovery within days of receiving the treatment.

The first cases of COVID-19 were reported in Wuhan late last year. Until recently, China has borne the brunt of the outbreak.

Almost 75% of the 110,000 or so confirmed global cases are in mainland China. More than 3,000 people have died as a result of the virus, with the majority in Hubei province.

The Chinese government has placed hundreds of millions of people under lockdown. Meanwhile, others have been unable to return to work due to travel restrictions.

News of the breakthrough only reached Dr. Wu, who is partnered with American stem cell company Blue Horizon International (BHI), early last week. In an exclusive interview, the scientist said ‘this treatment could potentially save thousands upon thousands of lives. Naturally, we are very happy with these results.’

‘Yes, it is a cure, but it is still very early in the process and we still have work to do. We need to finish the clinical trials to confirm whether stem cell therapy is safe and efficacy to treat COVID-19.’

Stem cells are cells that have the ability to develop into different cell types. They can also help repair damaged tissue. Scientists can take stem cells from adult tissue such as bone marrow. However, the most controversial type are embryonic stem cells. Those come from human embryos.

Dr. Brian Mehling is working closely with Dr. Wu on the research. He says the results of the medical trials are astounding. ‘As the COVID-19 outbreak unraveled, coincidentally it started in Wuhan, China which is where our stem cell labs have been for over a decade,’ he explained. ‘A lot of people were coming down with severe pulmonary pneumonia, pulmonary fibrosis and ultimately they were dying. ‘But it’s not the viral load that kills them it’s the pulmonary complications that develop, just like influenza.

‘Our research found that stem cells are extremely effective in decreasing inflammation and also enabling the body to repair damaged tissue. So we thought what the heck, let’s give it a shot. We gave nine patients, who were in the hospital with severe, acute pulmonary dysfunction, we gave them core blood stem cells via IV and 100 percent of them got better, so of course, we were astounded.’

Dr. Wu and Dr. Mehling said that since their breakthrough, the Chinese Government has approved and fast-tracked clinical trials for the treatment. Additionally, Dr. Wu’s company, Wuhan Hamilton Biotechnology-Co., LTD, has already received more than $5 million Chinese Yuan ($715,000) in government funding. With this, they’ll begin researching protocols. Over time, more funds are expected to come in.

Dr. Wu is Chief Science Officer for New York-based BHI. Currently, he is working with them to seek the approval needed for clinical trials in the USA. Sadly, it could take months before the treatment officially hits the mass market in China or the U.S. However, the breakthrough could bring about a change in how COVID-19 is tackled in the future. Additionally, this news is a sign of hope for vulnerable members of society.

COVID-19 brings about mild flu-like symptoms in most people. However, for the elderly or those with underlying medical conditions, it can be deadly. Speaking to the effectiveness of the treatment, Dr. Wu said: ‘It seems that the key to curing the pneumonia is to inhibit the inflammatory response. This results in a reduction in cell damage. Additionally, it may assist in repairing the function of the lung.

The doctor says his product has also passed the quality test of China’s National Institutes of Food and Drug Control (NIFDC). His firm is currently the only stem cell institution in the Hubei province. BHI is moving quickly to seek the necessary Food and Drug Administration approvals in the U.S.

Dr. Mehling says they have submitted the retrospective study data to an investigational review board (IRB) and once the study receives a rubber stamp, a research paper will be written for publication. His firm is also submitting an FDA protocol and applying for a study that they believe will be approved quickly due to the severe nature of the crisis.

Dr. Mehling said because his company has spent 10 years researching stem cell therapy, a treatment which he says is already ‘proven’ and ‘tested’, he believes their treatment will be ‘ready to deploy’ sooner rather than later. Additionally, BHI already has two approved clinical trials for UC-MSCs treating osteoarthritis and diabetic nephropathy.

BHI, which has offices in Europe and the Caribbean, also has plans in place for international expansion to make the treatment available to as many people as possible, as quickly as possible. With the right infrastructure and supply chain in place, the company will also be able to roll out treatment for dozens of other conditions around the world.

But former director of the US Centers for Disease Control and Prevention and former commissioner of the New York Health Department, Dr. Tom Frieden, told DailyMail.com that the CDC will need ‘clear evidence’ that any COVID-19 treatment works.

‘The priority now is to learn as much as possible about this virus and what works to stop it,’ he said. ‘This will include randomized controlled trials of potential treatments, some of which may be effective. Until we have clear evidence that any treatment works, and the means to deliver it to those who need it, we need to focus on what we can do now.’

Serial science and technology entrepreneur Nova Spivack, who operates a coronavirus information site with a team of doctors and medical experts called germinfo.org, says the new treatment could be ‘great’ if it passes FDA protocols, but warns that it likely won’t be widely available for at least a year.

‘Even if they find it working clinically and they have permission to test it on human volunteers, it will take a year at least,’ he explained.  ‘A lot is happening with stem cell treatments. It looks to be a very promising direction and there’s a number of trials in process. There are a relatively small number of patients that have been treated. It’s early in the process, but it’s a very astonishing direction.’

Sorry, the comment form is closed at this time.